Suricata on pfSense to ELK Stack

Suricata is an excellent Open Source IPS/IDS. While there is an official package for pfSense, I found very little documentation on how to properly get it working. Furthermore, there does not appear to be any native functionality to ship the logs it generates to alternative collectors, other than through syslog which I am already exporting to other sources. Below I will detail the steps I performed to get Suricata to ship logs a server running the ELK stack.

Warning: It is worth mentioning that I am by no means knowledgeable on FreeBSD (I'm really more of a Linux guy), so there are likely things that are not done to best practices. Furthermore, this procedure involves installing unofficial software on pfSense which is absolutely not supported. It is also worth pointing out that while pfSense is generally very light on resources, Suricata increases utilization by a good bit.

I will not be diving into the actual setup of either pfSense or an ELK server and assume both are already operational. pfSense has a good getting started guide here, while I found DigitalOcean's ELK guides for Ubuntu and CentOS to be very helpful. Elastic's official documentation is also great.

In the pfSense web interface, select System->Packages. Open the Available Packages tab, Suricata can be found under the Security tab. Use the plus sign on the right side to begin the install. Once complete, Suricata's settings can be accessed from the Services menu. First stop is the Global Settings tab.

Suricata uses downloaded rule sets to determine when to alert. There are two different types of rules that can be set up from this screen:

Set the Automatic Update to field to 12 hours and hit save at the bottom of the screen. 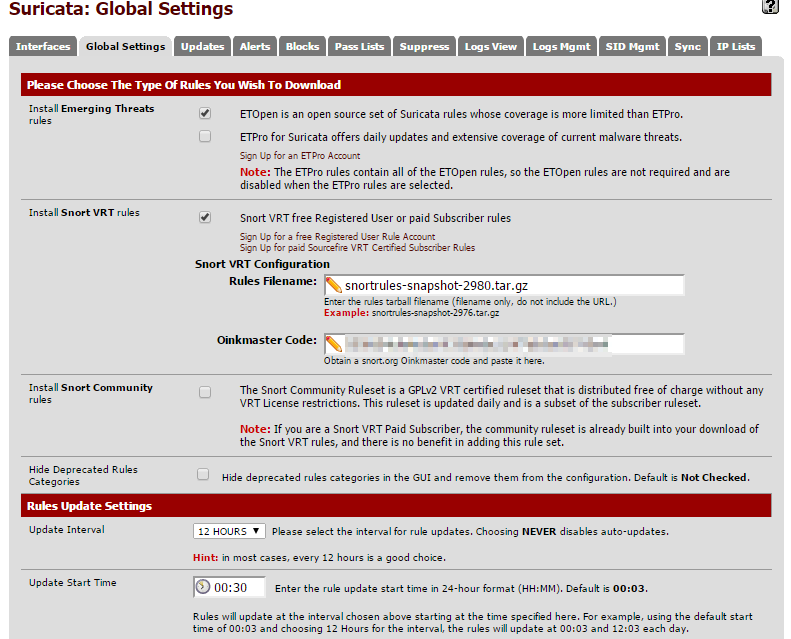 Now move on to the update tab to kick off the initial download of the selected rule sets. Just the hit update button and wait for everything to finish.

Now jump back to the interface tab. Click on the Add Interface Mapping button on the right side.

Pick your WAN interface in the drop down. The majority of the other settings can be left at their defaults. Now check off the EVE JSON Log setting. Make sure the Eve Output Type is left one "file" and all of the check boxes in Eve Logged Info boxes are checked off. For now, make sure both settings under Alert Settings are unchecked. This can be used to automatically kill sessions that match one of the rules we will be applying, but its best to let things run for a few days to ensure everything is operating as expected. Save the settings. 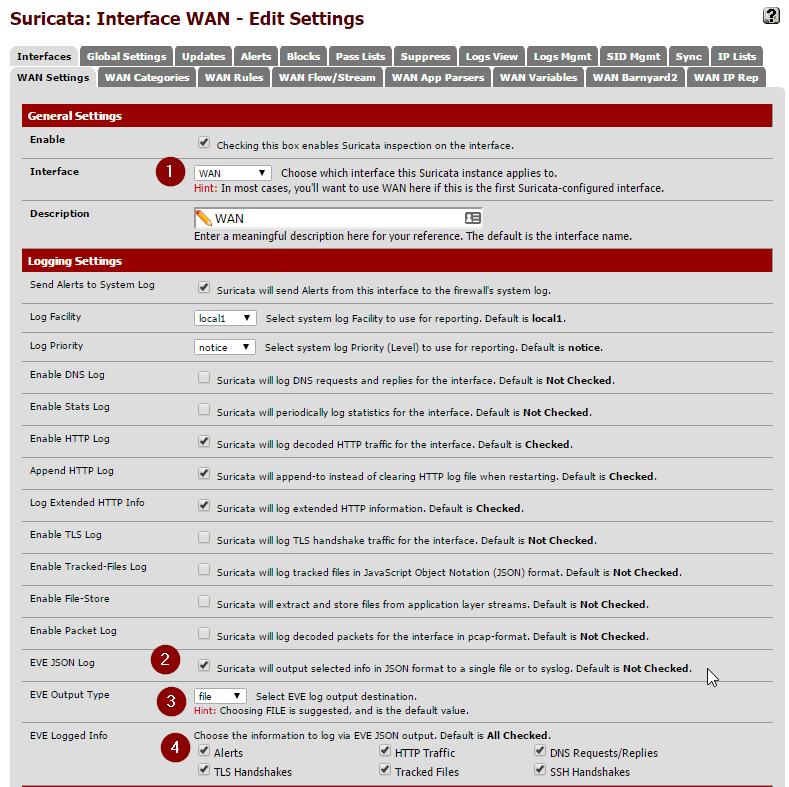 Now to apply the rules we downloaded to this interface. This is done in the Categories tab. When you open this section you should see all of the rules that were downloaded and extracted earlier. Simply hit the Select All then Save. 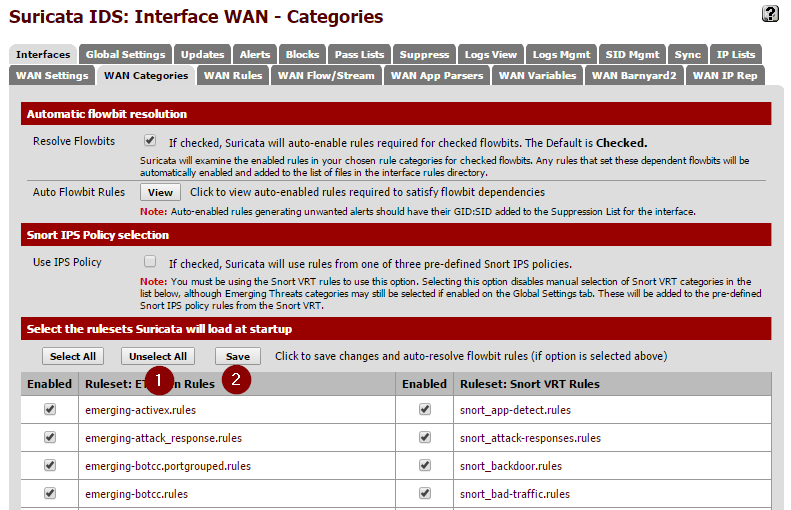 Next, check out the Rules section. This is where you can tweak which specific rules from the extract sets actually alert. For now you can just leave everything enabled. I did end up disabling rules under the decoder-events.rules and stream-event.rules. These seemed to create a lot of noise for things that didn't really appear to be issues related to low-level network behaviors. These events can be filtered from views in Kibana, but I found it easier just to disable them at the source.

After everything is set, got back to the Interfaces page. If there is a red X in the Enabled section, click it to start inspection. It should to a green check mark after a few seconds.

In few minutes, you should start to events that match an applied rule show up in the Alerts tab. 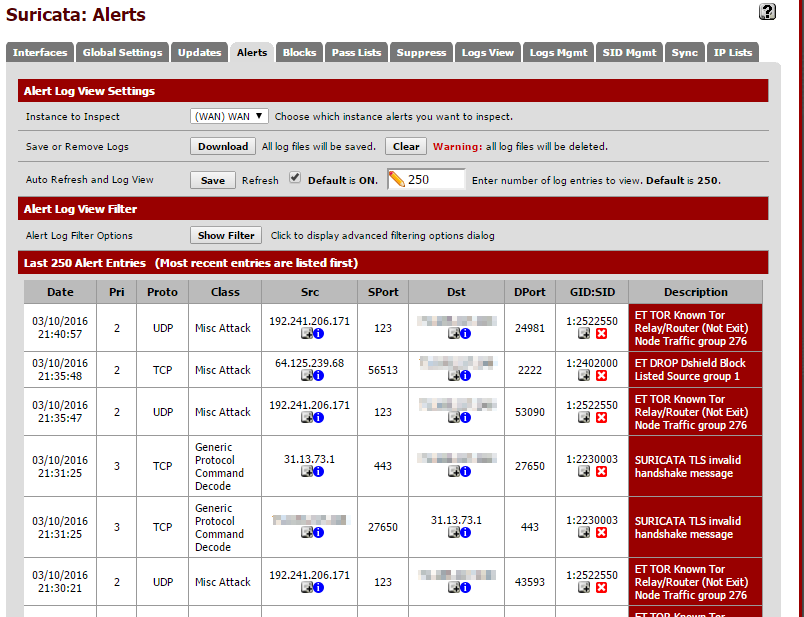 At this point, everything should be running that we need to on the Suricata side of things. Now its time to set up Filebeat to forward logs to an ELK server.

There is no official package from pfSense for Filebeat. In order to install it, you will need to manually download to package and set it to run on boot. This must be done from an shell session. If you have not already done so, enable SSH and get logged into the shell (8 from the main menu).

Elastic does not officially release FreeBSD variants of Filebeat. Luckily their build system produces new releases automatically. You just have to find the latest release.

First, find the hash of the latest push to the master branch. I did this from another machine:

You will get a JSON array back. Look for the sha field under object.

Now find the corresponding build on this page. You want the filebeat-freebsd-amd64 package. Copy the URL then fetch it right on your pfSense box.

Move filebeats to where we'll run it out of and ensure it is executable:

By default, Filebeat will look in its current directory for a configuration file called filebeat.yml. An example configuration can be found here. Ultimately we just need to ship any EVE files so the configuration will be fairly minimal, but first we need to find where those files are located. Generally, they seem to be located in /var/log/suricata/<interface_name>/eve.json but you can also locate them with:

The contents of /etc/filebeat/filebeat.yml should be:

Replace hosts with the IP address or host name of your Logstash server. Remember that white space is significant in YAML and tabs are not allowed. This is about as simple a configuration that you can get away with but there is much more that can be configured from here. Make note of the document_type field, which will be used in some Logstash filters later. Test for syntax errors with:

It will return nothing if the config file is properly formatted.

The easiest way to set Filebeat to start at boot is to add a shellcmd to pfSense's config. Per the official documentation there are two ways to accomplish this: manually editing the config or via an installable package. I had a lot of issues when doing it manually, so the package route seems like the better way to go.

Navigate to System, Packages in the pfSense menu and locate the Shellcmd package. Click on the Plus sign on the right to kick off the install. Once complete, the package can be configured via the Services menu. Click the plus sign to add a new command. In the Command box enter /etc/filebeat/filebeat. Leave the type box as shellcmd. Save the configuration. You will need to restart for Filebeat to begin running in the background.

Now we're going to jump over to the ELK server. Before we get into the actual configuration, let's grab a geolocation dataset that we be useful for mapping IP addresses to locations on a map. I generally just store it in the Logstash directory:

All of these could be defined in a single file but it is much more manageable to split them into separate files. Create and populate the following under /etc/logstash/conf.d:

Filter (make sure the path to the geo data matches): 10-suricata.conf

Now check the configuration, on Ubuntu 14.04 it is done with the following command:

The command should return Configuration OK if everything is good. Restart Logstash with service logstash restart to make sure it picked up the configuration changes.

You should now be able to see the events from Suricata in Kibana:

With the default configuration there is quite a bit logged since DNS and TLS connects are both included, but these can be filtered out by setting the event_type to alert.